YAGYU Shinkage Ryu was created around the late-1500’s by the pre-eminent sword master Kamiizumi Nobutsuna. The style was originally created out of a fusion of Katori Shinto Ryu and Kage Ryu styles of swordsmanship.

A key principle of the style is to use the sword to save lives, not take them. In other words, they seek not to win but also, not to lose. Hence they believe in a “life-giving sword”, not a “death-dealing blade”.

Yagyu Shinkage Ryu was the first sword style to fuse Zen with swordsmanship. Munenori composed a book in 1632 called the Heiho Kaden Sho, in which he fused many ideas in Zen Buddhism with those of swordsmanship. This book would became one of the Bibles of Japanese swordsmanship.

The Shogun Tokugawa Ieyasu was so impressed with the style and its philosophy that he appointed its master instructor, Yagyu Munenori, to be the official sword instructor for his family. Yagyu Shinkage Ryu then became the most famous style of swordsmanship in the land. 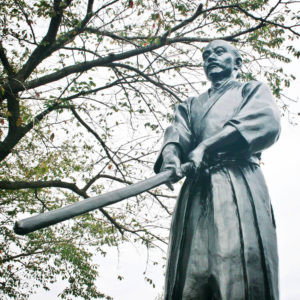 Classes are currently on hold until further notice This class runs on Monday evening at 8pm to 10pm. Please come 10-15 minutes earlier so that you are prepared. For new students, please wear comfortable and loose clothing. If ...
View Calendar